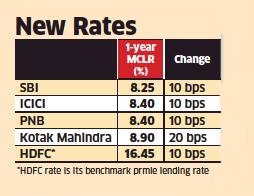 Brent crude hit $80 a barrel last month, the highest in almost four years, fuelling concerns of higher inflation in India that imports around 80% of its oil requirements. Every $10 increase in the price of crude adds 30-40 basis points to the country’s inflation, according to estimates by Japanese brokerage firm Nomura Holdings.

The hike in rates also reflects the upward move in the 10-year yield, which has risen quite sharply over the last few months. The yield on the 10-year benchmark government security is closing in on 8% for the first time since May 2015, with concerns over higher rates leading traders to sell their investments. The 10-year bond ended at 7.85% on Friday 1st June 2018. It has climbed more than 85 basis points since November 2017.

HDFC’s rate increase was the second since April, when it had raised benchmark rates by 20 basis points. The latest increase means that rates on home loans between ₹30 lakh and ₹75 lakh will now go up to 8.70%, while loans above ₹75 lakh will cost 8.80%. Loans up to ₹30 lakh have been raised to 8.55%. Women borrowers will get loans at 5 basis points lower for all the above slabs.

Public sector banks PNB and Union Bank of India have also increased their lending rates by up to 10 basis points effective June 1.