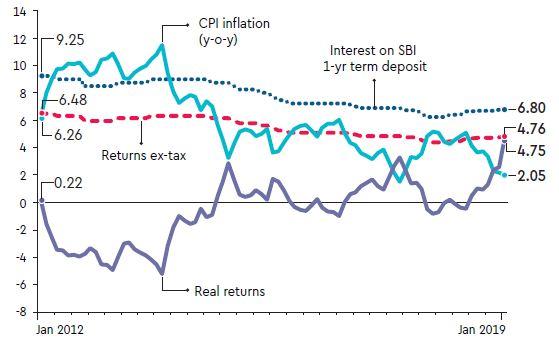 With inflation undershooting the monetary policy committee’s target band and persistently high deposit rates, real returns from fixed deposits hit an at least seven-year high in January. At 4.75%, the return on a one-year retail term deposit with State Bank of India adjusted for tax and inflation is the highest since India started measuring its inflation based on consumer prices. A one-year deposit with the country’s largest lender currently earns interest at 6.8%, which works out to a 4.76% yield, assuming a tax rate of 30%.

The closest real returns came to these levels was in June 2017, when SBI’s one-year deposit rate was 6.9% and CPI inflation was at 1.54%. Thereafter, savers’ income began to slide with a spike in fuel prices. Between November 2017 and June 2018, real returns had slipped into negative territory. Returns may not persist at these levels as banks may begin to pass on the Reserve Bank of India’s February rate cut.