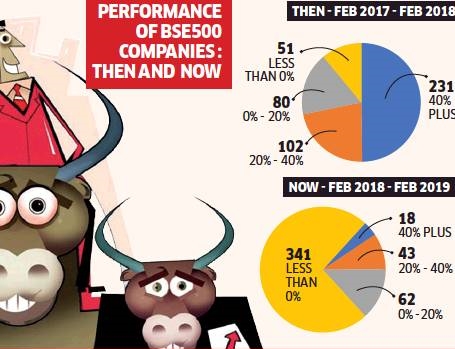 While Nifty has sharply clawed back after falling to 10,000 level in the second half of 2018, most key stocks have been witnessing a free fall. 32 out of 50 Nifty stocks and three out of four BSE500 stocks are in the negative. Nearly half of the stocks are down 20% or more.

In fact, some of the Nifty stocks including Zee Entertainment, Indiabulls Housing Finance, Vedanta, Tata Motors and HPCL have more than halved from their 52-week highs.

Other heavyweights such as DHFL and Vodafone Idea have seen over 75% fall.

Only a handful of stocks, mainly Reliance, HDFC Bank and HDFC have led this rise in the index, thanks to their rising weight in Nifty quarter after quarter.

Compare this to the market performance in the nearly two-year period ended January 2018.