Ultra high networth households are those which have a minimum networth of Rs.25 crore.

The average age of Indian ultra HNIs continued to fall. About 60% of the super rich surveyed this year were below 40 years compared to 47% in 2016, a Kotak Wealth Management report said.

Most of the ultra HNHs continued to live in metros, while 97% lived in the top-20 cities in India. The number of UHNHs in India increased by 10% to around 160,600 in 2017—at a compounded annual growth rate of 12% over the previous five years.

While 56% of the UHNHs hailed from the four metro cities, 18% of them were based in the next top six cities—Bengaluru, Ahmedabad, Pune, Hyderabad, Nagpur and Ludhiana. More than 50% ultra HNIs said that they have increased allocations into their primary businesses.

The UHNIs invested a significant 13% of their income for growing personal wealth, mainly to capitalise on the growth in the Indian equity markets, while the share of jewellery in expenditure has decreased to about 12%from 17% last year.

Around 200 such UHNIs were interviewed across 12 Indian cities by market research agency, hired by Ernst & Young. 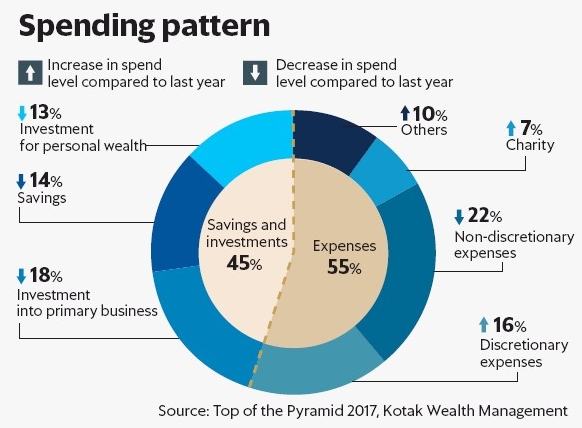