The ITAT order on EPF interest 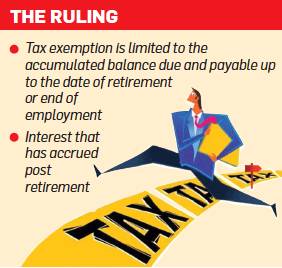 Tax laws provide that interest credited to an Employee Provident Fund account after an individual ceases to be in employment is taxable in his hands in the year of credit. In a recent order, the Bengaluru bench of the Income-Tax Appellate Tribunal also upheld this income tax provision while adjudicating the matter of a retired individual.

Post-employment, whether on account of termination, resignation or retirement, several employees continue to maintain their EPF accounts and earn interest on the same. Unfortunately, they are usually not aware of the tax implications on the interest accretion in the fund after termination of employment. Investment consultants point out that even in the case heard by ITAT, the taxpayer had mistakenly thought that the interest which had accrued to his EPF account post his retirement was not taxable.

This recent ITAT ruling is pertinent not only for retired employees, but also those who have quit employment for various reasons, say, to be an entrepreneur or a homemaker, and have continued to retain a balance in their EPF accounts.

According to a notification issued last November, when an employee resigns from his job or his services are terminated, his EPF account continues to be “operative” and earns an interest until he applies for withdrawal of the accumulated balance or takes up another job and transfers the balance. On the other hand, interest accrual norms are different for a retired employee. If an employee retires after 55 years of age and does not apply for withdrawal from his EPF account or transfer of the balance, then post three years from the date of retirement, his EPF account is treated as “inoperative” and does not earn any more interest.

The applicable rate of interest is announced each year. For the recently concluded financial year 2016-17, the interest rate was 8.65% and rates for the current financial year are expected to be announced shortly.

In the recent case, the man had retired from a prominent Bengaluru-headquartered software company after 26 years of service, on 1 April 2002, and the total amount in his EPF account then was ₹37.93 lakh. Nine years later, on 11 April 2011, he withdrew the grown sum of ₹82 lakh from his EPF account. This amount included interest of ₹44.07 lakh that had accrued post his retirement till the date of withdrawal.

The retired employee did not offer this interest amount to tax, as he viewed it would be exempt under Section 10 (12) of the I-T Act. During assessment proceedings for financial year 2011-12, the income tax officer sought to levy tax on this amount and the litigation finally reached ITAT’s doors.

Based on a reading of Section 10(12) and also the definition of “accumulated balance”, the ITAT held: “The exemption is limited to the accumulated balance due and payable to an employee up to the date of his retirement or end of his employment.”

ITAT pointed out that the term “accumulated balance due to an employee” is defined as the balance standing to his credit, or such portion of it as may be claimed by the concerned employee under the regulations of the fund “on the day he ceases to be an employee”.