More than 95 per cent Indian households prefer to park their money in bank deposits, while less than 10 per cent opt for investing in mutual funds or stocks, a new SEBI survey has shown. 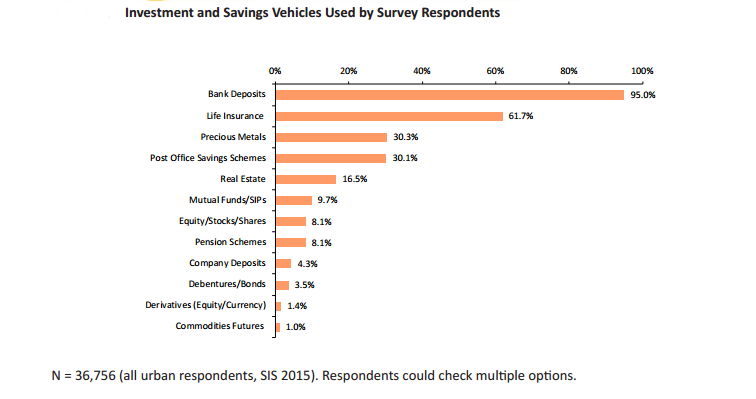 The survey, conducted across urban and rural areas of the country, showed that life insurance was second most preferred investment vehicle, followed by precious metals, post office savings and real estate in the top five.

Among the rural households, not even one per cent of the survey respondents were investors, while even the awareness about mutual funds and equities was dismal at just 1.4 per cent.

However, 95 per cent of rural survey respondents had bank accounts, 47 per cent life insurance, 29 per cent post office deposits and 11 per cent saved in precious metals. 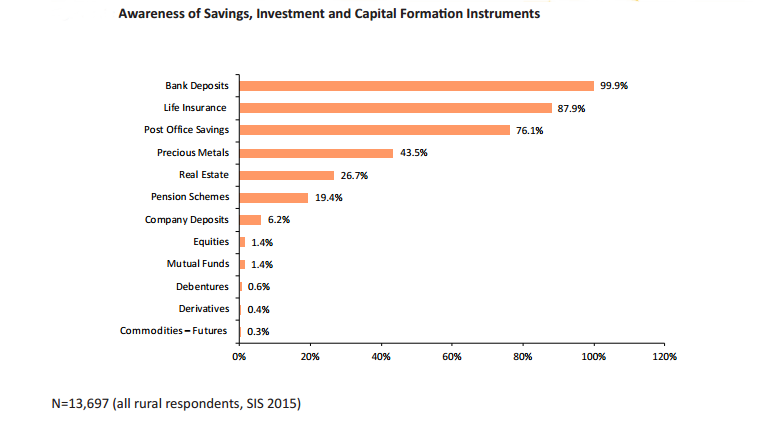 On a positive note, the survey found the investor base in India is increasing as nearly 75 per cent of the investors in the SEBI Investor Survey 2015 participated in the securities markets for the first time within the last five years.

The survey was commissioned in the year 2015 and got completed last year, while its results were released yesterday by the capital markets regulator. Nielsen, a global leader in primary research, has conducted and analysed this survey.

The SEBI said the survey first listed a set of 2,04,694 households and basic information about demographics, income, savings and investments were collected.

In the second step, a subset of 50,453 amongst these listed households were chosen to conduct the final survey.

The data was used to create an estimate of the total number of investing households at the end of 2015.

Using a bootstrapping methodology project, it was estimated that there were a total of 3.37 crore investor households in India. Of these, 70 per cent (2.37 crore) reside in urban areas while the other 1 crore were rural households.

Among derivative instruments, there were 30 lakh equity and currency derivatives investors and 21 lakh investors in commodity futures.

Amongst the equity investors, about 18 per cent (33 lakh) had invested in the primary (IPO) markets.

In his foreword, SEBI’s former Chairman U K Sinha, during whose tenure the survey was conducted, said the global financial crisis and its effect were felt in India since the last survey (held in 2008—09) and it was imperative for policy makers to understand the change in investor behavior as an effect of it.

When it comes to stock trading, a vast majority of 78 per cent investors in India continue to “call in” their trades, while just 22 per cent use Internet to place their trades despite a growing dependence on online technology, SEBI survey showed.

The main reasons for not trading online include lack of awareness about the procedures related to web trading systems, while there is a significant technology aversion and inertia as well.

The latest study follows three earlier surveys SEBI had commissioned to know how households save and invest. The last such survey, by NCAER, was released in January 2012.

The survey also showed that to attract new clients, most market participants use face-to-face interaction (52 per cent), followed closely by mass media advertising (51 per cent) and phone calls (50 per cent).

While bulk SMS (45 per cent) is very popular, social media (17 per cent) is not yet a common practice, it found.

In case of receiving information, market participants showcased their tech-savviness with 40 per cent ranking social media as their most important source of information, followed by the company websites and then the mass media.

According to the survey, more than 70 per cent of investors polled depend on financial planners and maintain running accounts/standing orders with their brokers indicating reliance on brokers and sub-brokers.

Despite a strong relationship with the broker, retail investors continue to primarily trust their own judgment when making investment decisions.

“Limited retail trading frequency, rising internet penetration and a surge in the number of authorised persons is significantly altering the traditional dynamics of the brokerage industry. Smaller brokers are either disappearing or are merging to form larger and more stable consolidation,” the survey noted.

It also noted that investors’ base in India is increasing and nearly 75 per cent of the investors polled participated in the securities markets for the first time within the last five years.

Interestingly, most retail investors trade either weekly or monthly and institutional algorithmic trading (computerised, automated trading) accounts for an increasing percentage of trades in the exchanges.