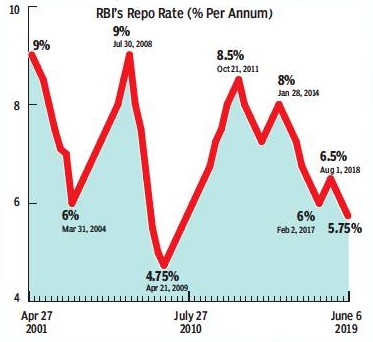 In a move that is likely to make mortgages, auto loans and other borrowings cheaper, the Reserve Bank of India cut interest rates by 25 basis points for the third time this year and hinted at more cuts by changing its policy stance from ‘neutral’ to ‘accommodative’.

Emboldened by benign inflation and availability of buffer foodgrain stock, the central bank’s monetary policy committee voted unanimously to bring down the repo rate from 6% to 5.75%—the lowest since September 2010. Repo rate is the price commercial banks pay to the RBI for shortterm funds.

The RBI Governor said that the fact that the bank’s stance was changed to accommodative meant that rate hikes were off the table for now.

Responding to comments that the earlier two rate cuts were not passed on, Das said banks have passed on 21 basis points through a reduction in lending rate.

A third reason for the rate cut was the return of the Narendra Modi-led National Democratic Alliance government in the polls last month which has firmed up hopes of fiscal responsibility.