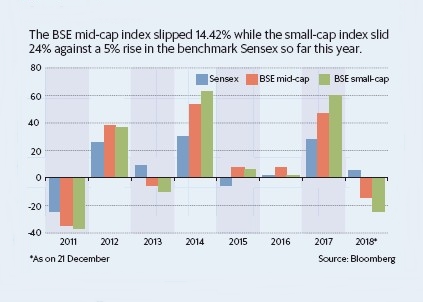 After a blockbuster rally last year, small- and mid-cap stocks lost some of their sheen in 2018 as investors grappled with the effects of steep valuations, macro headwinds, moderating domestic flows and changes in regulatory norms—all of that in the midst of a liquidity crunch.

According to some analysts, the main reason for the fall was overvaluation of both the indices. Other analysts point to regulatory changes adopted by the exchanges and the Securities and Exchange Board of India, which, they say, had the effect of disincentivizing traders from buying or holding on to the shares. The reclassification of mid-cap and small-cap funds by Sebi led to a significant realignment of funds according to the new norms. This reduced the demand for mid-cap and small-cap funds. Thus multiple intrinsic challenges in the backdrop of the rising cost of funds and declining global liquidity led to the sharp fall in mid-cap and small-cap indices. Despite a sharp sell-off this year, mid-cap stocks have not become cheap yet as these companies are still trading at a premium to their large-cap peers. However, the valuation gap between the BSE mid-cap index and Sensex is gradually narrowing. At current levels, the premium of the BSE mid-cap index to Sensex is at 6.6%. According to Bloomberg, the BSE mid-cap index is trading at 18.97 times based on FY19 earnings and at 22.39 times for FY20. In contrast, the Sensex is at 17.78 one-year forward PE 20.97 for next fiscal year.

Analysts, however, say that due to underperformance of stocks, valuations in the mid-cap space have come back to more realistic levels. They expect volatility in mid- and small-cap stocks to continue in 2019.