The share of equity investments in India’s household assets has reached a decade high following rising acceptance of mutual fund investments among retail investors. Data from RBI, AMFI, IRDA and MOSPI, compiled by CLSA, show that equity’s share in the country’s household assets increased to 4.6% in FY18, the highest since FY08. It had dropped to 2.2% in 2014 and has been gradually improving since then. 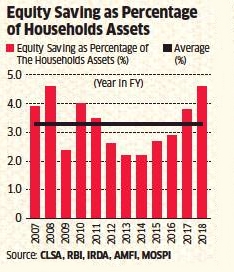 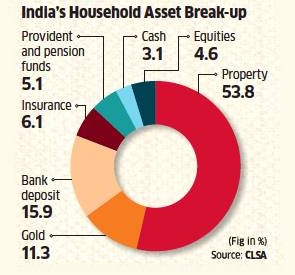 While the proportion was similar to that in FY08, what has changed is the route of investment. A decade ago direct equity investment was the chosen path. In FY18, investors opted for the systematic investment plans of mutual finds. The direct retail holding in the BSE 500 index stocks dropped to 11.7% in March 2018 from 13.1% four years ago. On the other hand, the equity assets under management of the mutual funds increased four times to ₹7.5 lakh crore boosted by inflows of ₹3.5 lakh crore during the period. SIP monthly inflows reached ₹8,200 crore in December 2018 from ₹3,122 crore in March 2016. In addition, mutual fund inflows in the four years to FY18 were four times higher than that in the 10 years prior to the period.