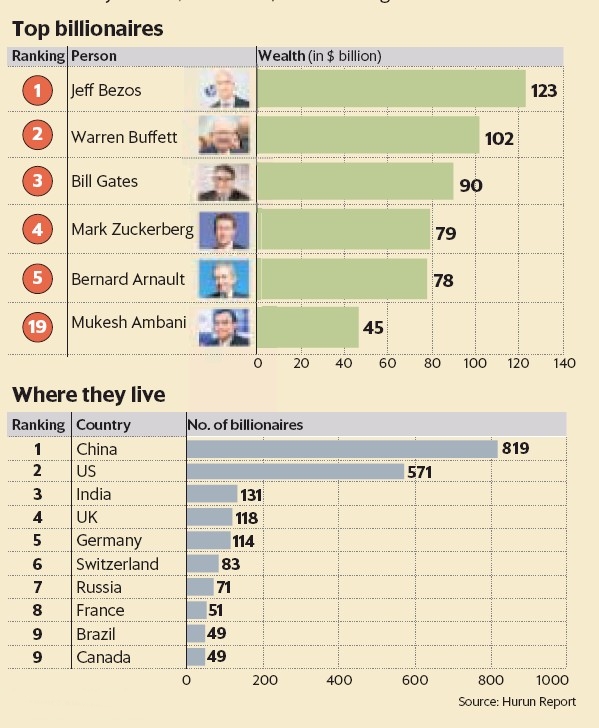 India takes third place after China and the US on Hurun’s Global Rich List 2018. It added 31 billionaires in the past year, taking its total to 131 US-dollar billionaires. However, China with 819 names and the US with 571 are way ahead. China has catapulted from the previous edition of the list, when it was neck and neck with the US at 534 and 535 billionaires, respectively. The list ranked 2,694 billionaires from 68 countries and 2,157 companies. The total wealth of these billionaires increased by 31% to $10.5 trillion, 13.2% of the global GDP. 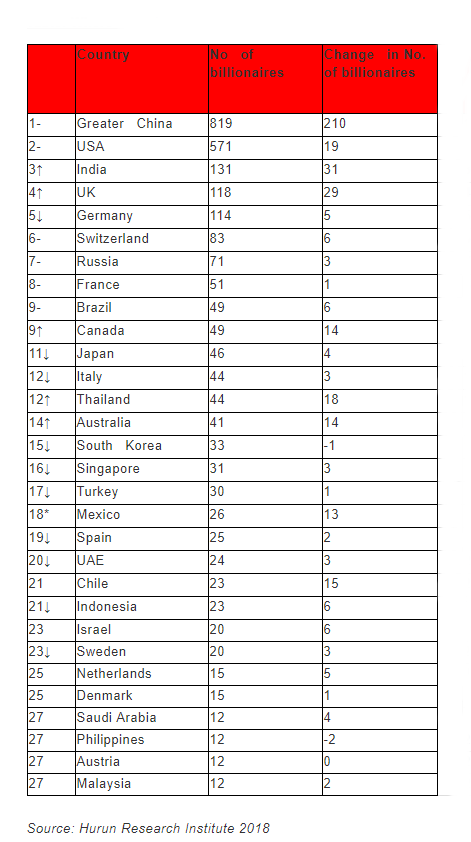 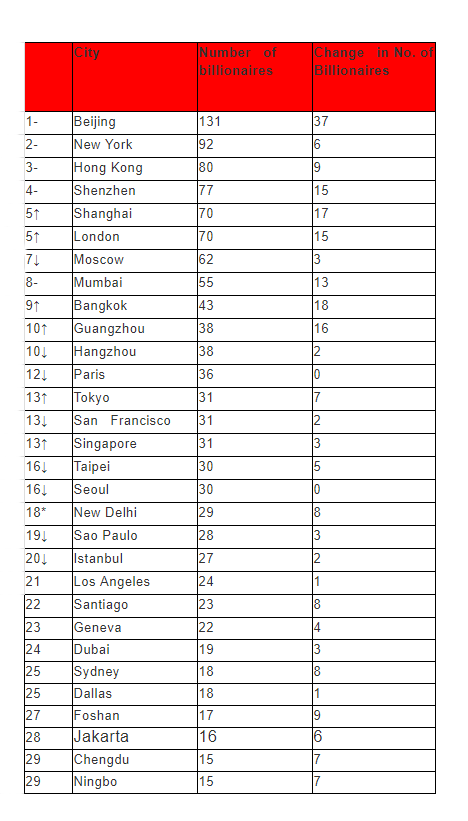 The ‘Big Two’ are Greater China and the USA with 819 and 571 billionaires, making up over half of the billionaires on the planet. It has been a good year for India too, which shot past Germany into third place. Mexico and Chile broke into the Top 20 for the first time. Beijing is now the undisputed billionaire capital of the world, adding 37 to 131, ahead of New York.  There are now more billionaires in the neighbouring cities of Hong Kong and Shenzhen than there are in the whole of California, 157 compared with 139.

The only Indian who saw a massive growth in his fortunes was Gautam Adani, the list noted, adding that his wealth doubled to US $14 bn (approx Rs.91,245 crore as per current value) in the last one year. The 55-year-old business tycoon witnessed a growth of 109 per cent in the last 12 months, grabbing the 98th spot in the overall list.

The data revealed that most billionaires in India come from the pharmaceuticals sector. It took the top spot with 19 billionaires, followed by Automobile & Components with 14 and Consumer products with 11. Among cities, Mumbai is the preferred destination for Indian billionaires followed by New Delhi.

Apart from India, only China and the United States had two or more cities in top 30. The number of Indian billionaires would have gone up but 31 of them migrated from India, with UAE, UK and USA as preferred destinations.

Also, if the Indian-origin billionaires are considered, the tally would have been 170 instead of the current 131. The combined wealth of the Indian billionaires increased by 49 per cent to US $454bn while the average age is 64.

Mukesh Ambani continues to be the richest Indian man with a 73 per cent increase in his wealth. The 60-year-old Reliance boss has taken his overall wealth to US $45 bn and is currently the 19th richest man in the world.