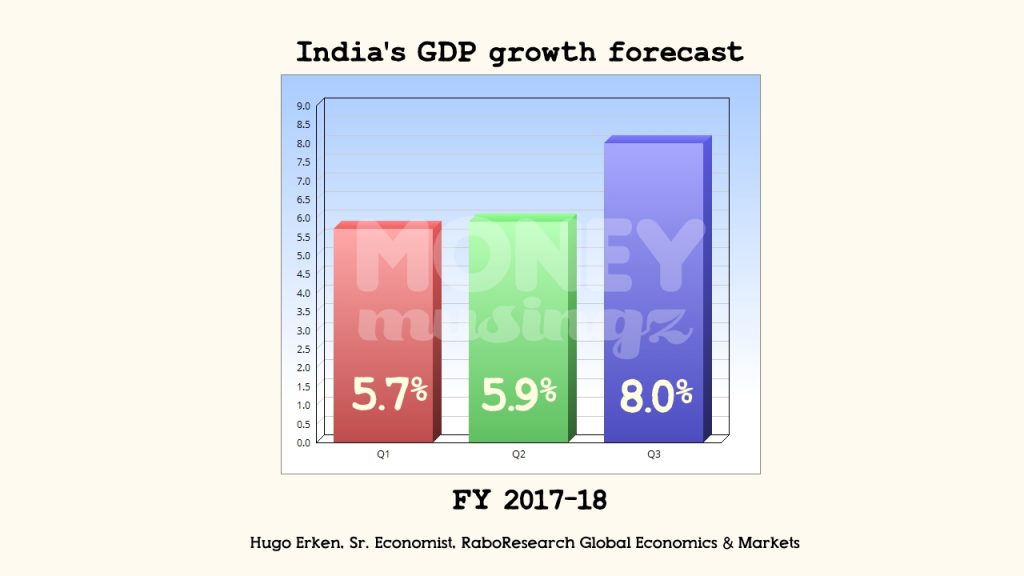 The only economist who accurately predicted India’s growth slump sees a bit more pain ahead. Gross domestic product will recover only slightly to 5.9 percent in July to September from the previous quarter’s 5.7 percent, which was the slowest pace since 2014, predicts Hugo Erken, a senior economist at Rabobank International.

“I think it is little bit too early to say if demonetization was useful. We still have to see what will eventually happen with tax collection and revenues. Personally, I think it was a bold decision, but in the end it will be beneficial to India because of continuing formalization of the economy. In the short-term, it is disruptive and as the GDP numbers show, India is paying a price for it. However, in the medium-term we are still confident that India GDP growth will pick up quite rapidly to somewhere near 8% towards the October-December quarter. We are quite bullish on India in the medium- to longer-term“.

Erken, who plays in an indie/rock/pop band called Overdwars when he isn’t making economic predictions, sees GDP growing 6.9 percent in the current fiscal year. He began covering India for Rabobank at the start of 2017 after stints with the Dutch government.

Economy India
Previous PostIndia: The new growth engine?! Next PostMore about the NPS