The government has launched Bharat-22 — a new ETF of 22 companies, including central public sector enterprises, government banks and some holdings of the government’s investment arm SUUTI. The new ETF will help the government sell equity stakes in state-run firms.

Take a look at how the new Bharat-22 ETF will be different from the existing CPSE ETF.

Bharat-22 will have 22 constituents against CPSE ETF’s 10. In that sense, Bharat-22 will be more diversified, and will capture the PSU universe better than the CPSE ETF.  Bharat-22 will also have a single company cap of 15% weightage in the fund, and a sectoral cap of 22%, ensuring that it is well represented by a diversified spectrum of PSUs.

While CPSE ETF has only state-run companies as its constituents, Bharat-22 will give the government a shot at selling stakes in some of the private sector blue-chip companies as well, as it will include some holdings of SUUTI (Specified Undertaking of Unit Trust of India). SUUTI holds equity stakes in over 50 companies, including large holdings in L&T, ITC and Axis Bank, earlier held by the erstwhile Unit Trust of India before its breakup. SUUTI’s equity stakes in L&T, ITC and Axis Bank alone are valued at above Rs.50,000 crore.

Bharat-22 will cover six sectors. It will feature four banking stocks — SBI, Bank of Baroda and Indian Bank and Axis Bank (private) — other than CPSEs such as Nalco, ONGC, IOC, BPCL and Coal India. Besides, there will be nine other PSUs as well as REC and PFC. SUUTI’s holding in ITC has also been included. Ninety per cent of the equities included are traded in futures.

ICICI Prudential is the fund manager for Bharat-22. The CPSE ETF is managed by Reliance Nippon Life.

Here is a list of stocks to be included in Bharat-22 with their weightages: 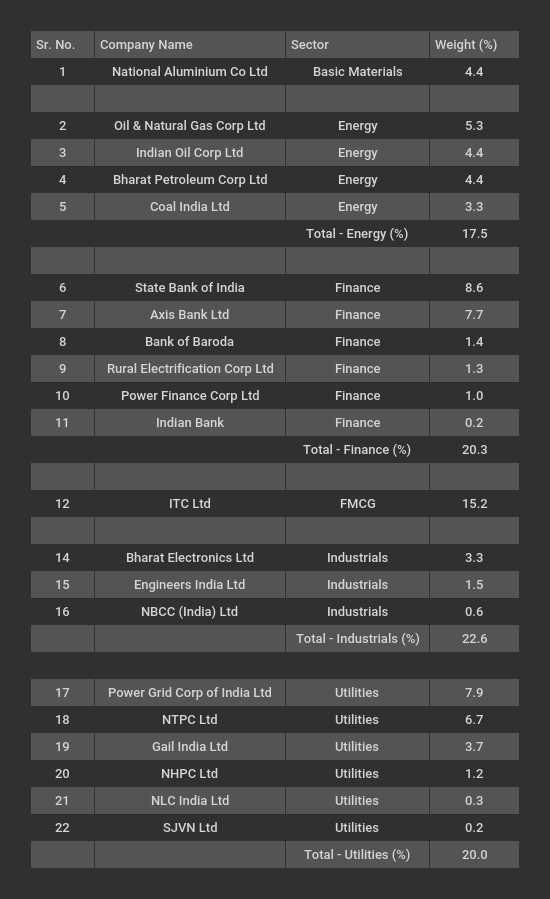