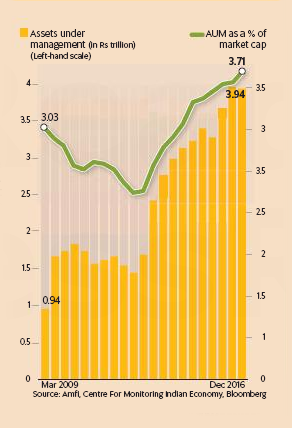 Flows from domestic institutions have gained prominence in recent years. Inflows through systematic investment plans alone are around Rs.4,000 crores per month currently.

What does all of this add up to in terms of share of individuals in overall market capitalization? According to data collated by the Association of Mutual Funds in India, equity mutual funds held by individuals amounted to Rs.3.94 trillion at the end of December 2016. This is about 3.7% of the total market cap of stocks listed on BSE.

Before the rush of retail flows into equity mutual funds in March 2014, the share of individuals stood at 2.27%. Of course, individuals also hold stocks directly, although that figure has remained more or less steady around 7.5% between March 2014 and December 2016. In addition, individuals hold stocks through their unit-linked insurance plans, although there is no clarity on what amounts are held through this route.

The share is expected to continue rising, thanks to the continued growth in the mutual fund industry. The regulator and the industry’s efforts to increase the reach of mutual funds beyond the top cities is paying dividends. In January 2017, the share of equity mutual fund customers based in the top 15 cities of the country fell to 71%, from 73% a year ago. If the trend continues, and new customers continue getting added to the mutual fund platform, flows should sustain for some time to come.

Some market participants are enthused that such high domestic inflows will drive the markets to much greater heights. But much also depends on market returns. If returns turn negative for a few months, flows from individual investors tend to turn negative.