Dalal Street may have just completed its longest rally in last 10 years, with BSE Sensex climbing some 345% since March 2009, but investors have made money at a much slower pace compared with its previous spells.

The rally tested investors’ patience all through, and garnered an average of 0.70% return a week, the least compared with the previous major rallies. Investors had earned an average weekly return of 1.5-2.5% in the previous bull markets. 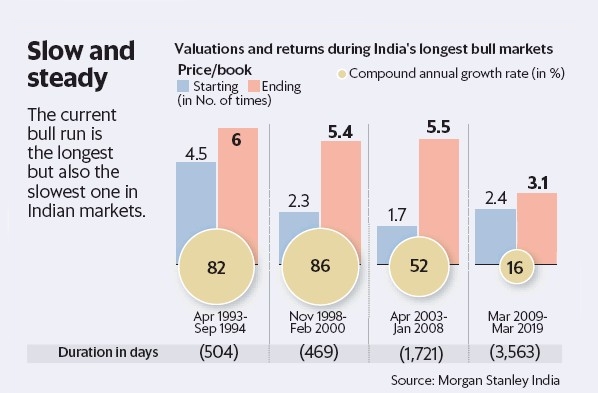 “The bull market that began in March 2009 just completed its 10th year. This has been India’s longest and slowest bull market with a CAGR in returns of 16%. The BSE Midcap index has outperformed Nifty and Sensex with a CAGR of 18%,” Morgan Stanley said in a report.

The brokerage has set its December 2019 target for the Sensex at 42,000, implying an upside of 20 percent and 25 percent in rupee and dollar terms, respectively, compared to the MSCI EM index’s upside of 7 percent in dollar terms.

The only caveat to its high target is that the Indian electorate does not deliver a shock verdict in the forthcoming 2019 Lok Sabha election by delivering a fragmented coalition government.

NSE’s Nifty is up 1.80% this year till date, while Asian peers Hang Seng, Nikkei and Shanghai have risen up to 24%.

China, the world’s second largest economy, recently cut its official GDP growth target to 6% for this year amid the ongoing trade war with the US and continued economic distress.