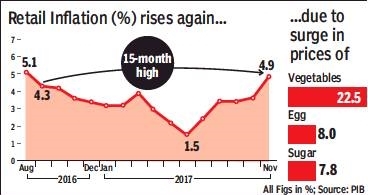 The economy may not be out of the woods yet with retail inflation shooting to a 15-month high of 4.9% in November, and factory output sliding in October on subdued performance by mining and manufacturing.

The CPI-based retail inflation jumped to 4.9% in November on annual basis, as compared to 3.6% in the preceding month. 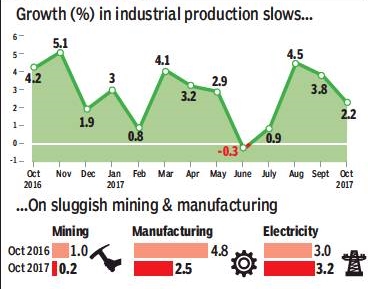 The IIP, commonly known as factory output, continued to decline and fell to a three-month low of 2.2% on annual basis in October mainly due to subdued performance of mining and manufacturing sectors coupled with a contraction in output of consumer durables. The IIP had expanded by 4.2% in October last year.

Reversing a five-quarter slide in GDP growth, the economy bounced back from a three-year low to expand by 6.3% in the July-September quarter, compared to 5.7% in the April-June period as manufacturing revved up and businesses adjusted to the new GST regime.

The CSO data on CPI revealed that inflation in protein rich eggs shot to 8% in November on annual basis, as against 0.7% in the previous month. For vegetables, it was 22.5% in November.

In the fuel and light segment, it was 7.9%, as against 6.4% in October. The jump in retail inflation comes within days of the Reserve Bank warning that there may be a spike in prices in the coming months. The central bank had also raised its inflation projection for the remaining months of the current fiscal while keeping the key interest rate (repo) on hold.

As for industrial production, when compared on a monthly basis, the IIP had grown 4.1% in September this year. Industrial output is up by a meagre 2.5% for the April-October period of the current fiscal, compared to 5.5% in the same period of 2016-17.

Electricity generation rose 3.2% in October as compared to 3% a year ago. The mining activity recorded almost a flat growth of 0.2% during the month under review as against 1% growth in October 2016.