In a highly expected move, the Reserve Bank of India has cut the repo rate by 0.25 percent in its monetary policy review on August 2, 2017, the third bi-monthly monetary review for the financial year 2017-18. The repo rate is the rate at which banks borrow from the central bank. The rate had remained unchanged in four previous occasions as RBI considered the situation of status quo unless inflation was brought under control.

The top bank kept the reverse repo rate at 5.75 per cent. The six-member monetary policy committee of the RBI headed by RBI Governor Urjit Patel announced the rate cut for the first time in 10 months. The central bank last cut its key interest rate in October 2016. The panel isn’t fully convinced about whether inflation has structurally moved lower.

The Reserve Bank of India’s decision to cut its policy repo rate by 25 basis points to 6 per cent is likely to lead to a further cut in the lending rates, especially home and car loans by banks.

Financial sector experts believe that consumers are in for a good time with EMIs likely to come down and lenders likely to come up with festive season offers on loan rates in the ensuing months.

Old borrowers under the MCLR regime would have to wait until the next reset period to get the rate reset. On the other hand, base rate customers can switch to the MCLR regime to take advantage of the lower rates. This may incur a switch-over fee of around Rs. 5,000-20,000. But the overall interest would reduce substantially with the said option.

The table below shows how the MCLR rates have come down over the last 1-year. 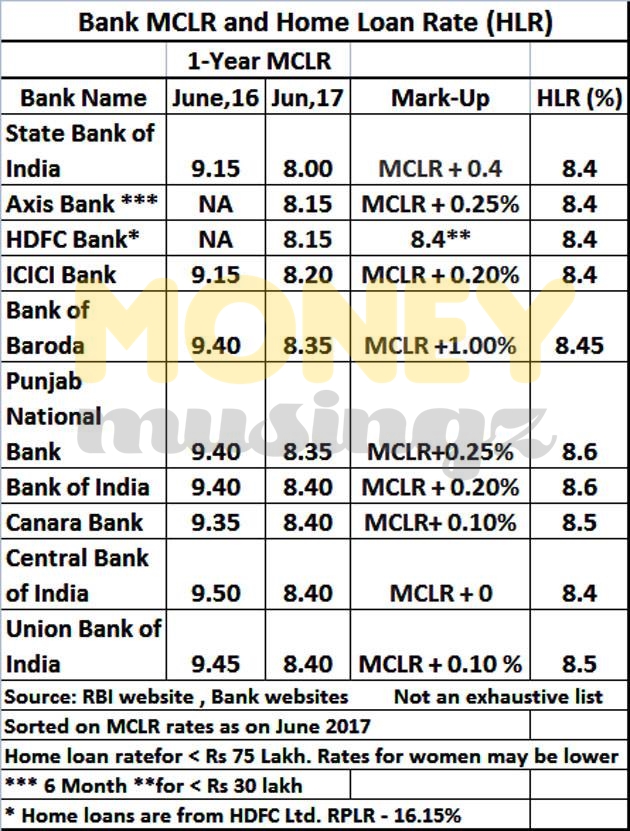