According to RBI’s highly rated Consumer Confidence Survey, households’ sentiments on the general economic situation for the current economic period has worsened from the previous round. The survey was conducted in May 2018 and the previous round in March 2018. About 48 per cent of the respondents felt that the situation has deteriorated.

Households in general were pessimistic about the employment situation, with 44 per cent of them feeling that it has actually worsened. A significant number of respondents felt that the prices have increased and will continue to increase going ahead. Even though the government has been patting its back on bringing down inflation, 79 per cent of respondents felt that it has actually gone up.

The survey was conducted in New Delhi, Mumbai, Bengaluru, Chennai, Kolkata and Hyderabad.

On inflation, the net response in September 2018 is better than in 2013. The perception of the economic situation is also better. The details are given in the accompanying chart. Note that this survey is done in six big cities, so it is a gauge of sentiment in metropolitan India, and not small towns and villages. Also, note the deterioration in sentiment compared to that in September 2016, before demonetisation started.

Indeed, the government has done a remarkable job of keeping people’s hopes alive. The risk for the government is that current reality may finally dampen future expectations, which is what seems to be happening in the markets.

In short, the National Democratic Alliance government has a tough task on its hands in the one year before the elections to change the mood of disillusionment. 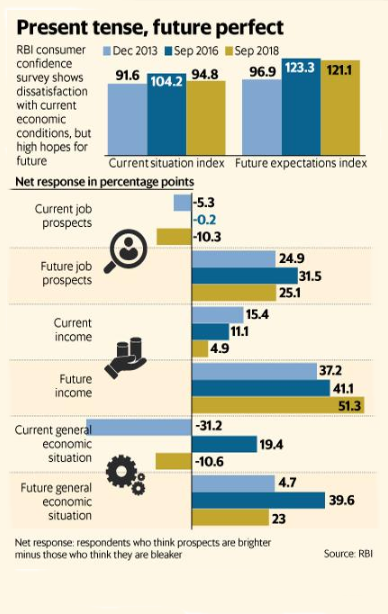