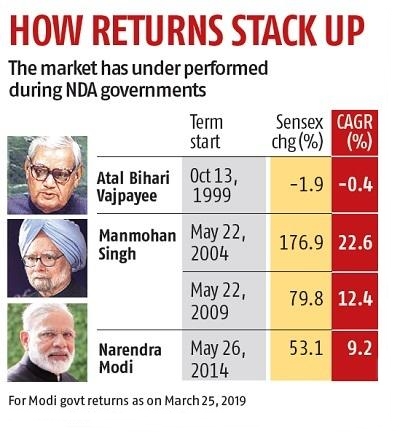 When the BJP-led National Democratic Alliance came to power in May 2014, the markets rallied buoyed by the hope that the resounding mandate given to the NDA would lead to policy decisions favourable to industry.

However, five years on, the benchmark Sensex is up only 53 per cent since May 26, 2014, the day Narendra Modi was sworn in as the 15th Prime Minister of the country. This translates into annualised returns of 9.2 per cent, which is below the 10-14 per cent considered to be the average long-term annualised returns for equities as an asset class.

The returns are also well below what the markets had posted during the two Manmohan Singh-led United Progressive Alliance governments. During the five years of UPA 1 (2004-09), the Sensex delivered annualised returns of 22.6 per cent and another 12.4 per cent compound annual growth rate under UPA 2 (2009-14). The sub-par returns under the current government will disappoint investors who had pinned their hopes on the performance of the Modi government.

As it turned out, in the last five years, corporate earnings belied expectations due to the turbulence caused by big policy decisions like demonetisation in November 2016, the implementation of the GST in July 2017 and The Insolvency and Bankruptcy Code in May 2016. The note ban was particularly painful for companies outside the large-cap universe. 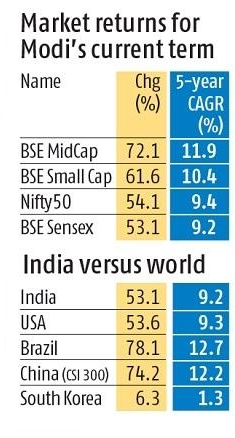