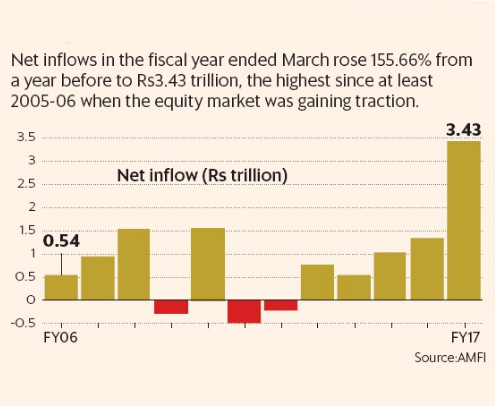 Net inflows in the fiscal year ended March rose 155.66% from a year before to Rs.3.43 trillion, the highest since at least 2005-06 when the equity market was gaining traction, data from the Association of Mutual Funds in India showed.

India’s benchmark index Sensex rose 16.88% during the financial year, and was the third best-performer among its Asian peers. The index has delivered a compounded annual return of 13.48% from 2005-06 to 2016-17.

Mutual fund SIPs allow investors to regularly invest small amounts that go into equities instead of making lump sum investments at various points of time. Such investments are mostly made on a monthly or quarterly basis, although it is possible to make them even every week.

Income and liquid schemes received maximum net inflows during the period. Net inflows in income schemes rose more than seven-fold to Rs.1.2 trillion, while that in liquid funds grew more than four times to Rs.95,826 crore.

People have flocked to income funds after the drop in fixed deposit rates. A number of investors have switched to debt funds from FDs.

The gone-by fiscal saw a surge in the number of retail investor accounts, or folios, in equity, equity-linked saving schemes and balanced categories, which grew by more than 58 lakh to 4.4 crore.