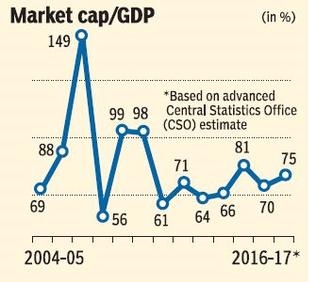 (in the recent past)

Market Cap to GDP is a long-term valuation indicator that has become popular in recent years, thanks to Warren Buffett. Back in 2001 he remarked in a Fortune Magazine interview that “it is probably the best single measure of where valuations stand at any given moment.”

After a flattish 2016, no one was expecting Indian market to deliver stellar returns and hit a record high in the first three months of the year 2017. The rally has boosted India’s market capitalisation/GDP ratio to around the 100 mark, a valuation indicator which suggests that the market is going into overvalued zone. India’s Mcap to GDP ratio stands at 97 percent, according to an IDFC report.

MCap to GDP ratio keeps a check on the valuation and sentiment of any market. Any movement much above or below the 100 percent level provides an indication to the investor that whether the current valuation is overvalued or undervalued. Some analysts also compare it with the average level seen in the last 10 years, which could well be below 100.

It peaked at 147 percent at the end of 2007. It is good to check the outlook of the economy and compare its valuation to peer country for a better perspective, suggest experts.

Any uptick in Mcap to GDP ratio does suggest caution for investors but it is not alarming because the economy is still expanding compared with other developed economies which are in stagnant phase or low growth rate.

The ratio could well surge above 100 in no time but this should not be the only measure which investors should consider while deploying their money into markets, say experts.

Market valuations can be captured in a broad range of indicators such as Price to Earnings, Price to Book, Market Cap to GDP, Earnings Yield in comparison to interest rates etc.

Any uptick in the economy will also reflect on the balance sheet and earnings of the companies which are economy-linked.

Instead of looking into Mcap to GDP ratio, investors should focus on Mcap to forward GDP. After demonetisation, most experts slashed their estimates of India economy below 7 percent. However, latest GDP data proved them all wrong. CSO pegged its advance GDP growth estimate for the current fiscal at 7.1 percent.