Over five crore provident fund subscribers will soon be able to track and redeem at market price the portion of their PF money invested in shares. The retirement fund body’s central board of trustees has given its go-ahead to a new accounting policy for its equity-linked investments.

Under the policy, 15% of the PF contribution that is parked in equities will be allotted as mutual fund-like units to the subscribers.

This can be redeemed when the subscriber exits the fund or withdraws the accumulated money. The Employees’ Provident Fund Organisation is allowed to invest up to 15% of the PF money in equity through exchange-traded funds — the rest is parked in debt instruments. Investment in ETF started in 2015, with a view to maximise the returns for the fund’s subscribers.

At present, the return on the equity part is neither factored in while calculating the interest rate declared every year nor is reflected in the subscriber’s PF balance sheet. After the implementation of the new policy, which is expected by the next financial year, PF subscribers will have two accounts: one for the 85% money put in debt on which the EPFO will pay an interest and the other for the part invested in equity. On the equity part, returns will depend on the market price of the ETF at the time of redemption. When a subscriber decides to withdraw PF, 85% of the total investment would be paid back along with the accumulated interest.

On the remaining 15%, the payment will be calculated by multiplying the number of accumulated units with the prevailing market price of the ETF. The subscriber would have an option to defer the withdrawal of the equity investment for up to three years if the subscriber thinks that it can fetch him better returns.

The Finance Ministry had earlier notified a new investment pattern for EPFO, allowing the body to invest a minimum of 5% and up to 15% of its funds in equity or equity related schemes. After that, the retirement fund body started investing up to 5% of its investible deposits in ETFs in August 2015. 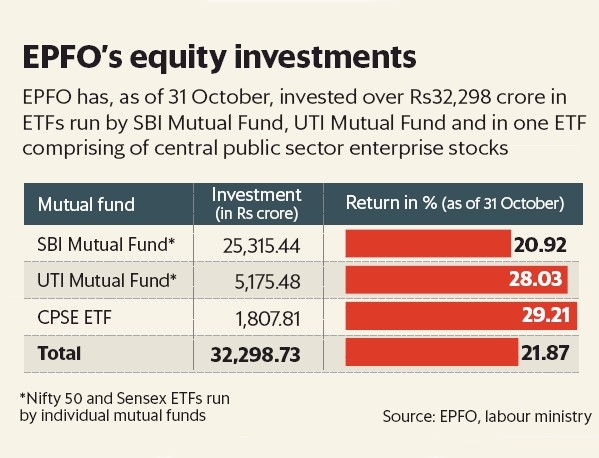