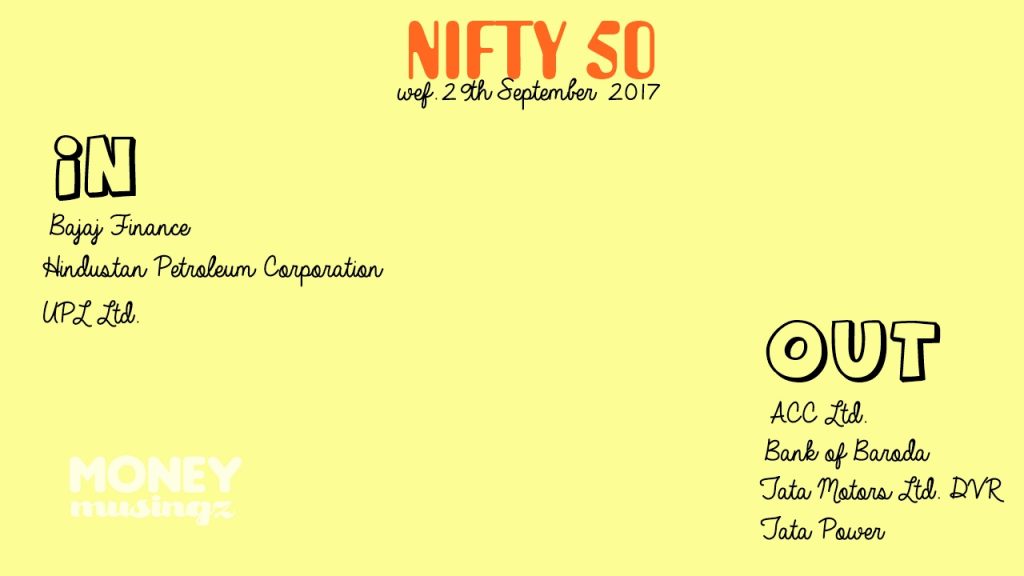 ACC Ltd, Bank of Baroda, Tata Power and Tata Motors Ltd DVR will move out from the NSE’s benchmark Nifty 50 index from September 29.

These firms would be replaced by Bajaj Finance, Hindustan Petroleum Corporation and UPL Ltd.

The changes in Nifty 50 were announced today by India Index Services and Products Ltd, an arm of the National Stock Exchange as part of its periodic review.

Five companies —— Bajaj Finance, Divi’s Laboratories, Hindustan Petroleum Corporation, United Breweries and UPL Ltd —— would be excluded from Nifty Next 50 index which composes of 50 companies from Nifty 100 after excluding the Nifty 50 companies. These firms would be replaced by ACC Ltd, Avenue Supermarts, Bank of Baroda, MRF Ltd and Tata Power.

Moreover, as many 25 firms including Amtek Auto, Reliance Capital and Reliance Industrial Infrastructure would be shifted out from Nifty 500. Avenue Supermarts, BSE Ltd and Jindal Stainless are among the 25 companies which would be taking their place in this index.

Meanwhile, Divi’s Laboratories and United Breweries would be replaced by Avenue Supermarts and MRF Ltd on the Nifty 100.

As many as 10 companies such as Reliance Capital would be excluded from Nifty Midcap 150. The index would include United Breweries and nine others from September 29.

While 29 entities will be replaced under Nifty Smallcap 250, Nifty MidSmallcap 400 will see replacement of 26 firms.

Among other, ten companies would be replaced under Nifty Smallcap 50 index and Nifty Midcap 50 index will see replacement of five companies.

Justdial would be replaced by Infibeam Incorporation under Nifty IT index, while Hindustan Copper and Jindal Stainless (Hisar) would take the place of Orissa Min Dev Co Ltd and Ratnamani Metals & Tubes Ltd.

Nifty PSU Bank would see the entry of Indian Bank, while RBL Bank would be included under Nifty Private Bank index.