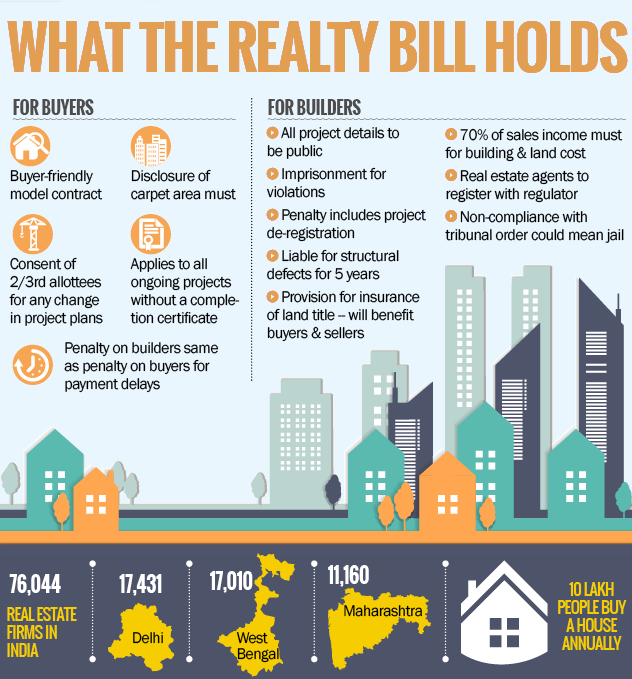 A home buyer will be armed with several new rights specified under the Real Estate (Regulation and Development) Act, 2016 , including the right to obtain information relating to sanctioned plans, layout plans along with the specifications, approved by the competent authority.

Buyers will also be entitled to know stage-wise time schedule of completion of the project, including provisions for water, sanitation, power and other amenities and services as agreed between the promoter and the allottee.

Buyers will also be entitled to claim possession of apartment along with completed common areas such as parks, clubs, internal roads etc.

Earlier, most buyers would procure these documents through the Right to Information route as it was not obligatory on the part of the developer to share all these documents but under RERA, they now have the right to ask for them.

This means that the developer will now have to hand over the project with ready common areas that include parks, internal roads, club house and open spaces. Currently, the developers complete the towers first and then start work on the common areas but often charging maintenance for all these facilities. It is now clear that no property can be sold in isolation but along with the completed common areas.

Homebuyers also have the right to know the completion plans, no-objection certificates from the fire department, airport authority, invoices of lifts, water pumps, DG sets and even those of air conditioners installed by the developer in the apartment.

RERA also specifies that if a buyer decides to cancel his booking, the developer will have to refund the amount along with interest within a period of 45 days. Currently, if the consumer applied for cancellation of allotment, the builder would immediately cancel the unit but delay the refund indefinitely and the excuse was that the builder was unable to resell the unit.

The government last week notified the remaining 32 sections of RERA relating to registration of ongoing and new projects and real estate agents with regulatory authorities within three months from May 1 and penalties for non-compliance with the provisions of the Act. About 60 sections of the Act were brought into force with effect from May 1 last year.The RERA Bill, 2016 was passed by the Rajya Sabha in March this year, while Lok Sabha passed it on March 15 last year. Until now 13 states and union territories have already notified the final real estate rules, while another 16 have prepared draft rules and legal opinion is being taken in respect of North-Eastern states given the land ownership issues there.