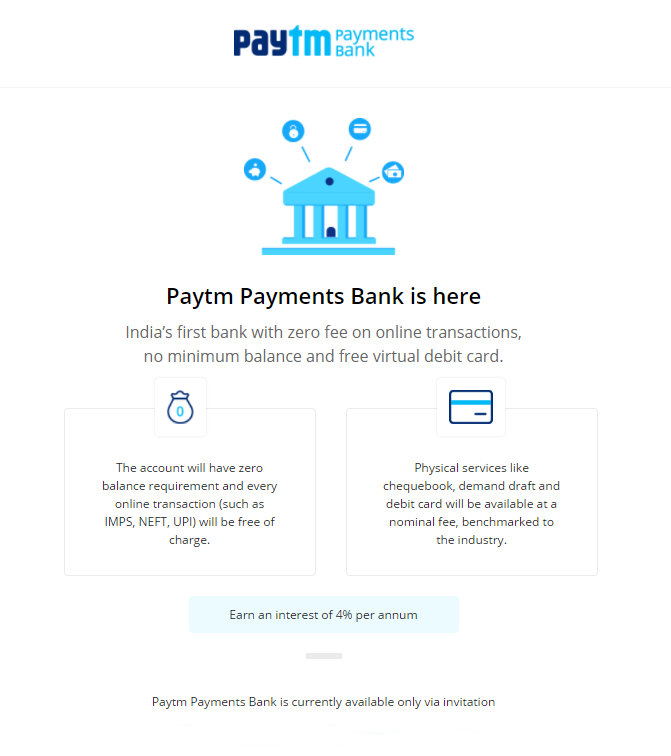 It is offering customers a 4 per cent annual interest rate as well as cash back on deposits. This is the lowest among the three payments banks: Airtel offers about 7.3 per cent interest and India Post about 5.5 per cent annually. “The first million customers to open accounts and have deposits of Rs.20,000 will get cash back of Rs.250 instantly. Accounts can be opened with a zero balance. All online transactions will be free of charge,” the company said.

Its first branch would be in Noida. Paytm plans to open 31 branches and 3,000 customer service points in a year. The initial accounts will be invitation only. The bank will roll out its beta banking application for employees and associates soon.

The company is setting up Know Your Customer centers across the country. The bank will offer current accounts to its six million online and offline merchants as well.

As Paytm wallets have been merged with the new entity, Paytm Payments Bank, all wallets are being transferred to it.

The company plans to open 500 million accounts by 2020. “Leveraging the power of technology, we aim to become the preferred bank for 500 million by 2020,” said Renu Satti, chief executive officer, Paytm Payments Bank.

Paytm would also offer RuPay cards to customers. “We will offer five free ATM transactions (in non-metro cities) per month. After that, customers will pay Rs.20 per ATM withdrawal,” the company said.

Airtel charges 0.65 per cent on each cash withdrawal. India Post is the only payments bank at present which offers a card to its customers to take out cash from its India Post ATMs.