Indian investors have bested their offshore counterparts when it comes to influencing stock market rallies. For the first time in this century, and possibly for the first time ever, Indian investors, including mutual funds and insurance companies, bought more shares in the Indian market in the 12 months to May 2017 as foreigners’ interest waned.

Driven by surging SIPs inflows, Indian mutual funds and insurance companies invested Rs.71,665 crore in the year beginning May 26, 2016, compared with FII net purchases of about Rs.60,000 crore. This is the first time that domestic investors have outpaced offshore funds in influencing a market rally.  Stocks have jumped 18% since May 26 last year, and by nearly 35% since February 11, 2016, when the Sensex fell to 22,591. DII investment is also not far behind that of FIIs if one looks at investment from February 2016 when the Sensex and the Nifty began their climb to record levels. Yesterday, the Sensex ended at an all-time high of 31,109 and the Nifty closed at 9,604, also an all-time high. 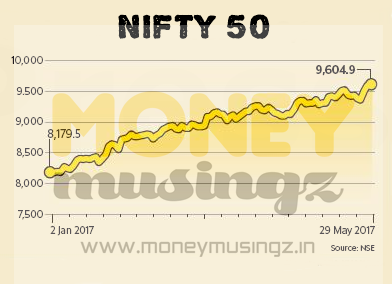