Technical analysts identify trends (i.e. up, sideways or down trends) by looking at charts….Some of the charting techniques used are….. 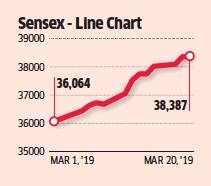 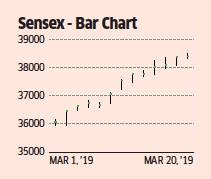 Bar Chart: Though closing price is the most important data point, high price and low price occurred during the day spurred by extreme greed and fear also are important. As visible from the bar chart, the upper-end of the bar represents the highest price on that day, lower-end shows the lowest price, and small line on the right side of the bar represents the closing price. Some technical analysts also use opening price while plotting bar chart and the same is plotted as a small line on the left side of the bar. 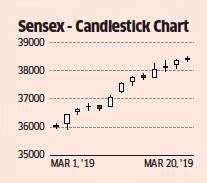 Candlestick Chart: This is also plotted with four data points — opening, high, low and close; and differs from a bar chart in the way these data points are plotted. As visible from the chart, the portion between the opening and closing is marked as a thick line (i.e. known as body of candle), and the remaining parts as thin lines (i.e. known as shadows, wicks, tails, etc). This is because the relationship between opening price and closing price explains a lot about the action during the day. Higher closing price compared to opening price shows the strength of the bulls. Similarly, lower closing price compared to opening price reflects strength of the bears Traditionally, body of the candle is marked white in bullish days and black in bearish days. However, to make chart visually more appealing, several technical analysts now plot green body in bullish days and red body in bearish days.

Other Charts: While there are several other charting techniques (Point and figure, Kagi, Renko, etc), these are more complicated and not used frequently.